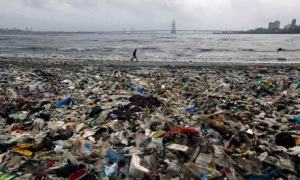 Pollution is widespread in Lebanon and not enough seems to be done to tackle it. In the past two weeks residents protested exposure to pollution from a power plant and landfill. Over the past year, this blog wrote about many pollution incidents such river and sea pollution. Many more incidents can be found on local media. Despite several efforts made by the government and donor agencies to tackle this problem, there has been little news of anyone being held accountable.

In 1997, Greenpeace warned about extensive industrial pollution in Lebanon and specifically named, among other companies, Selaata Chemical Company in Batroun. According to the Greenpeace report, the Lebanese industry generates more than 326,000 tons of waste a year, which includes toxic waste. The report predicted that the Lebanese industry to be generating a million tons of waste a year by 2010. Four years after this report, in 2001, the Ministry of Environment warned that all industrial polluters risk being shut down if they do not stop polluting. Since then, several measures have been taken towards curbing pollution, most recently the creation of an Environmental Prosecutor dedicated for these issues; however, a lot remains to be done.

In the beginning of last month a rare event took place in Batroun. The Internal Security Forces (ISF) raided Selaata Chemical Company for dumping waste in the sea, according to the governor of North Lebanon who examined the operations of the facility. The Daily Star article that reported this story claims that this raid is part of a nationwide crackdown; however, there have been no reports of other companies being raided. The governor of the North of Lebanon gave the company one month to halt its polluting activities. The company has in turn denied these allegations and claim they abide by international standards and regularly monitor their emissions and wastewater as requested by the Ministry of Environment.

The Environmental Law, Law 444 of 2002, is the basic framework of environmental governance in Lebanon. The law is based on 11 principles, one of which is the Polluter-Pays-Principle. This means that polluters are responsible to pay for pollution prevention and control. The law also includes detailed information on fines and penalties incurred in cases of environmental violations.

The Lebanese government needs to initiate a proper investigation, and if proven guilty, hold Selaata accountable. For decades industries have been polluting Lebanon’s environment. The Environmental Prosecutor needs to be empowered and charge polluting industries that are responsible for various forms of pollution. It is time to implement Law 444 and force polluting companies to pay for years of pollution and environmental degradation.